Finally, I could experience the event where Carmen and I had spoken about for months already. I flew on Friday at 12 in the afternoon but due to a delay, I arrived one hour later, at 14:30. Carmen picked me up at the airport, I bought a train+metro ticket for the 3 days and we went together to Moosach, the name of Carmen’s neighbourhood.

We directed dressed up and went to the Oktoberfest. Although it was somewhere around 3 o’clock, it was still around 20 degrees. Perfect weather conditions as we called it. When we arrived I was overwhelmed by all the people and the event itself. I did not know that there were also attractions and lots of typical and non-typical food trucks. Between all those, there were huge tents, as they call it, where there was always an area outside with lots of tables, same as inside.

We just walked around because that was already nice enough. There were so many things to try for me that it was impossible not to eat haha. 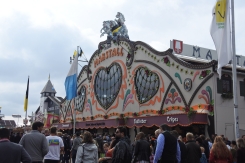 Oh yes, I forgot to tell. Carmen went already to the Oktoberfest on Tuesday and lost her voice, also because she got the flu. She could not talk on Friday, therefore she communicated with her head and hands, and if necessary she expressed herself with notes on her phone. Because we both found it nice to go home and relaxed, we watched a film during the evening and talked. I mainly talked haha.

Carmen told me that we needed to wake up early in order to have a place in the tent because they expected so many people. However, because Tina and her two other friends were coming around four in the afternoon we did not want stay from 9 in the morning until 11 in the evening at the Oktoberfest. Therefore we decided to arrive at 1 o’clock. The tents were all very full, but, because everyone was having lunch instead of dancing, we decided to walk around and also go for lunch. At 3 o’clock we decided to try to go in one of the most popular tents. Point was that we were waiting in a queue for around 45 minutes. What I did not know is that you can reserve a table for one of the tents, where you, of course, have to pay for. Those people have a benefit of entering the tent, obviously. Gladly, we were just the two of us because with the more people you are, the harder I think it was to get in. Because we were waiting for so long we met two other German girls, who were, in the end, send to the same table as we were. We got a table outside and ordered a ‘mas’ beer with the girls. Next, to us, there were two Dutchmen, who had been to the Oktoberfest for already over 20 years. It was nice to talk with them because they shared their experiences and told us some tips&tricks about the Oktoberfest. They were, by the way, the only Dutchies I saw this weekend.

To go into the tent at the end of the afternoon/evening you also have to wait. The queue did not look very long, so when everyone finished their beers and went to the toilet, we tried to go in. In the end, we did not get into the tent. We tried a few times more and waited for around 40 minutes. Because it was so full inside only the people with a reservation could go in, those who had a band around their wrist, and the guys from the communities. Carmen knew one guy from a community and helped us to go inside. When we arrived at the door, the guy from the community got in, and I? I got a stamp in my stomach from the security… We stopped trying and went to another tent.

When we arrived there, we also needed to wait for 10 minutes. We met two guys from the USA and made a deal that if we would help them to go in with us, they would all pay us a ‘mas’. And of course, it worked. So another ‘mas’ it was. After 5 minutes I think, Tina also arrived with her two friends, Marie and Maria. I am sorry, but I still do not know who is who…

We were now with seven girls and two boys because the connection was so good with the girls from the other tent, they also went with us to the other one. It was amazing to see how all those people were enjoying themselves so much. The tables which were used during the afternoon for lunch, where now all used as a podium, because everyone was standing on it. No one was sitting anymore. The Oktoberfest ended at 11 o’clock but there was still a whole night in front of us. 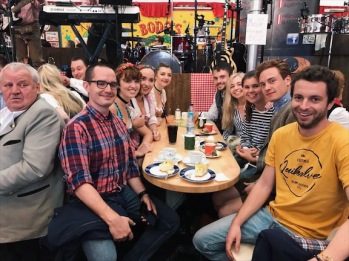 On Sunday, we went again to the Oktoberfest to meet the people we met on Saturday. We took a lunch at Rischart, Kaiserschwarm again, love it! After, some of the people went to attractions, me just watching because my stomach was way too weak for an attraction like that. And then, it started to rain… Because everyone was cold, we went into another tent for a tea or coffee and later on, around 5 o’clock Carmen and I said goodbye to everyone and left the Oktoberfest.

My flight was at 8:50 and because I already checked in and only had hand baggage, taking the train from Moosach at 6 o’clock was early enough.

When I arrived on the plane and found my seat, I directly fell asleep. When the steward came by to give me some water and a wrap my neighbour woke me up. After that, I could not sleep anymore, but it was fine. I had an amazing time and it was all worth it!!