Hola señoras y señores! Here I am, 11.430 kilometres away from what I usually call my “home”. The flight from Schiphol Airport in Amsterdam to Santiago, Chile, took totally around 18 hours. I had a stop in Buenos Aires, Argentina for two hours. After I bought my breakfast at Starbucks I went back into the, almost empty, aeroplane to make myself ready for the last one and a half hours to Santiago.

Oh, I was so ready to start this adventure. Of course, there was a moment at the airport when we all said goodbye and it became a bit hard, but actually after already five-ten minutes I was okay. I was going to do this and I wanted it so badly. Only needed to wait eighteen hours for it haha…

The arrival in Santiago

Even though, my flight was very good and did not feel that long because I slept a lot, I was still very happy when I arrived on Chilean ground and my friends (Sebastian and Constanza) were there. We spend half of the day together until I could go into my apartment, which was around three o’clock. It was so nice to finally spend time with them after two and a half years of not seeing each other!

My apartment and neighbourhood 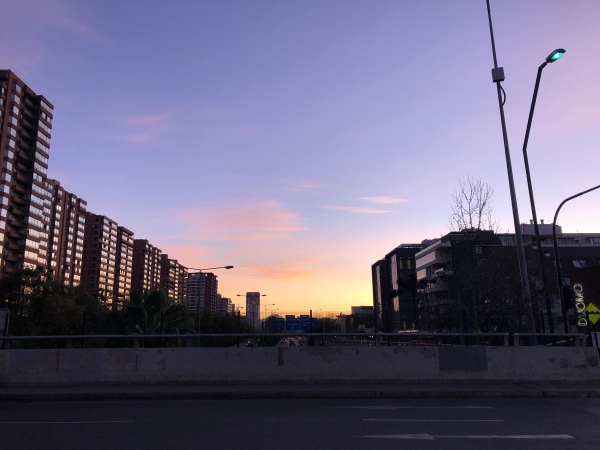 Here is a link to see pictures of my apartment. I share the kitchen and living room with three other people, so I have my own room and bathroom. Most of the buildings in Santiago are, by the way, high buildings. Until what I have seen now in my neighbourhood, have all buildings a “concierge” as we call it here. He opens the door for you, pays attention to the security camera’s and receives all packages and post, etc. The building also has a gym and an outside swimming pool. The gym is not very big, but they have a crosser, spinning, a machine for abs, a balance ball, and some weights. I am already very glad that I can use it for free!

I live in one of the three best neighbourhoods in Santiago and when I spoke about it with my Colombian flatmate (Maria), she told me that you can also see that when you look outside. The streets are clean, no where is rubbish and there is taken care of nature. 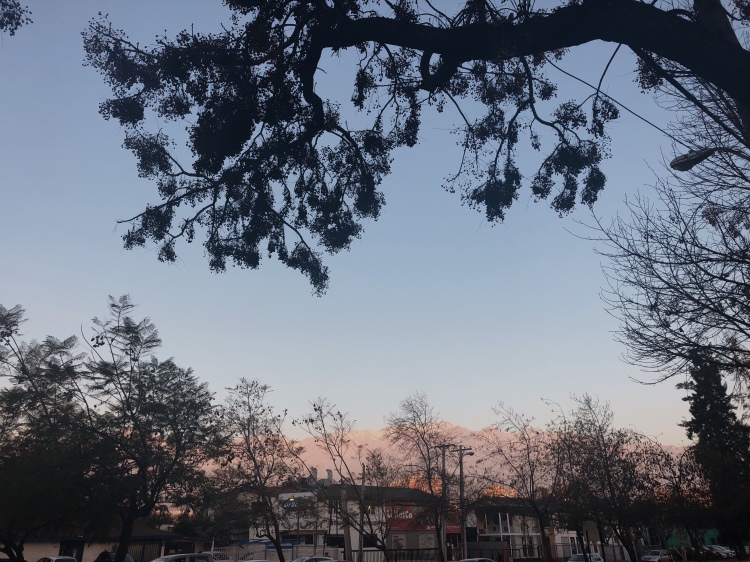 How is everything in Santiago?

So, Santiago is a city of around seven million people and lays between two mountains. At the moment, we are at the end of the winter, which means: blue sky and sun, but four to seven degrees in the morning and seventeen to twenty-five in the afternoon. I only brought spring/summer clothes with me, so I hope it is going to be mid-September very very soooon.

When I arrived, Constanza was a bit sick and told me that it is most likely to happen during the winter. I will explain you why. So, the public transportation in Santiago is not very good. Therefore, lots of people have to go by car to work. During the winter season there is not a lot of wind, therefore, stays the pollution between the mountains in Santiago and creates a cloud above the city. This makes “vulnerable” people, especially children/babies sick. However, as you can guess it is getting worse because more people are getting sick. And yes, I was sick, too…

Another thing, when I walk on the streets and look people in the eyes, I tend to smile at them (in sense of saying: Hola), however, most of the time they look at me like: “Chica why are you smiling? I spoke with Maria about it and she told me actually the same story. Maybe they just do not like the winter…?

Besides that, it is very common to have earthquakes here. I have already experienced one earthquake when I was at work. Everyone keeps telling me that I should not worry because it is very normal here and all buildings are build in a way to survive Richter Scale 10. Still, my heart was in my throat… In addition, all the wires are not going under the streets, but above the streets. It all looks a bit chaotic and a mess, but they sort of have no choice because putting the wires under the streets is far too expensive because of the insurance.

Now the cost, my less favourite part… You probably think: “Ahh South-America is very cheap”. If you think this I am not going to say that you are wrong because you are not. However, there are huge differences per country, especially compared to Mexico and Colombia as people tell me here. Still, Santiago is not very cheap, but also that differs per product. I will show you.

The reason why I did not include any fruits or veggies is that people advise not to buy them in the supermarket but go to a local market. I did, on my first day, and I can tell, it was a disaster… With no Spanish for me and no English for them plus I had no idea about the money yet. The amount of 2000 Chilean Pesos is called “Dos Mil”, which for me is actually 2.000.000 (you can guess how confused and shocked I was). Eventually, we managed, but at one point, I was asking myself “Why I am not just going to the supermarket and choose the easy way to do this?”.

Now, the reason why I am in Chile, my internship. As you read, at the beginning of my blog, I go by bike to my work. It is through a sandy park and around 4.3 kilometres one way, with a bit up/downhill. Even though it is very safe where I cycle, I am wearing a helmet. This is not just for fun, because I feel totally ridiculous, but it is a law. So, I bought a helmet, but I would not be me if I did not make sure that the helmet matches my bike haha… 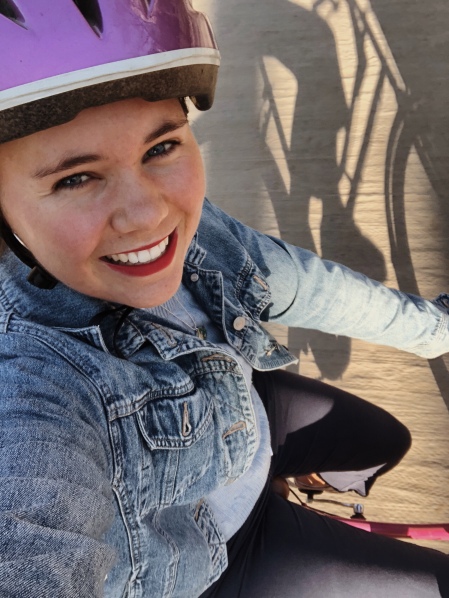 Cristian (my supervisor) welcomed me and we went to all the colleagues to introduce me (some speak English, most of them not). They all left a good impression, I felt welcome! Christian has his own office plus extra desk where I sit with my laptop. This week I have experienced that, even though you spend 41 hours at the office, it does not mean that you work 41 hours. I think, I worked in total three hours and the rest of my colleagues also did not really seem to be in a hurry with everything. Until now, I link it to the culture but this was week one, so maybe it will change in the upcoming week? However, I hope that you can understand that I started to laugh a bit when my colleagues were asking me if I also look so forward to the weekend… The only thing I had done was a bit of financial administration, attending meetings to listen, writing this blog, and searching for great weekend trips. My whole week was already weekend haha.

How do I feel?

This is a question which is easy and difficult to answer. I feel how I feel and how I experience it. However, because you are not here it is my task to explain that in words. So, I feel great, I feel as if the world is at my feet and I am rocking it. It feels like no one is standing in my way to live life the way I want. I am confident, grateful, positive, and learning. Because yes, learning is a huge thing. The culture is one thing, but the language (me not speaking Spanish, them not speaking English). I came here with let’s say: 15% of Spanish, which is not even the Chilean Spanish… At work, everyone talks in Chilean Spanish to me and I must try to answer in Spanish too. They let me make mistakes and help me to improve (and yes, I have already really improved my Spanish. I even Whatsapp in Spanish with some friends and that makes me so happy) without laughing at me. This is for me so important and helps me so much with my progress and confidence in learning this language. Same for the people in the supermarkets and the “concierge” of the building.

Besides that, I am exercising a lot. Not in sense of gym five days a week, but I want to walk/run more than 10.000 steps every day (whole day sitting is nothing or me) if I indeed do not go to the gym haha and then I also cycle around 8 kilometres every day. I am full of energy and feel also very energized. Everything is without pressure and that is maybe even the best feeling of all because I still go and do really enjoy it! Now waiting, for how long I am going to feel like that (he mom haha).

Another thing is just the whole experience; all the new things I do/experience myself and the decisions I make, because whatever the result is, it is what I choose to do. It is me who does it. I again went somewhere new and adapt to the environment, the people. That makes me very proud because I stand here, with my arms, eyes, ears, and heart wide open.

One thought on “Settling down in Santiago, Chile”